The Truth About The Great Loop 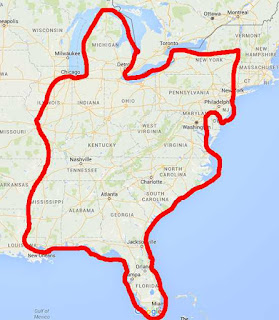 The Great Loop is an awesome idea. If you've never heard of it, it's a series of connected lakes, rivers and man-made canals that allow a boater to travel from the Atlantic ocean, to the Great Lakes, Down the Mississippi back out to the ocean.


For the reluctant boating partner, the Loops offers benefits as well. There is a distinct start and finish, which is the home port where you start from and ultimately come back to. As well as a nice and tidy completion timeline of one year, which is enforced by the seasons.

It's really no wonder the Great Loop has become so popular. However, it's kinda like a "here hold my beer!" idea. An idea that sounds good in theory, but in reality is just not smart. But before I go any further, let me offer a few disclaimers:

- There are some people who really enjoy the type of cruising offered by the Great Loop. And that's cool! I am very happy for them.

- There are some truly beautiful sights and amazing experiences along the Great Loop and perhaps the only way to know what you're not missing out is to complete the loop.

Okay. Without further introduction. Here's why I think the great loop is a bad idea:


1. It sets you up to fail
Traveling on a boat is hard work. If the most you have ever done is the occasional two-week boating vacation, then you've experienced vacation boating. When on vacation...you get to do whatever you want. Relax, explore, travel. It's very different from extended long-distance cruising.

When you're living and traveling on a boat, you have to find groceries, and laundromats. you have to find a way to the hardware store or boat store, because things break. And all of this must be completed without a car, in a town you've probably never been to before.

Traveling on a boat is hard work, and the Great Loop is CONSTANT TRAVEL FOR THOUSANDS OF MILES. The Loop is like a road trip where you travel from sun-up to sun-down. You stop for the night, then get up and do it again the next day. Every day, for months.

Ultimately, it's a poor way to spend your first cruising experience.


2. It's Mostly Boring.
There are highlights along the Great Loop. However, most of the way is dull scenery. It's like expressway driving. Every now and then you see something cool, but most of the time it's just dull scenery. The same is true for the Loop. Sitting at the wheel traveling at 6-12knts day after day. My wife often tells people "9 out of 10 days will be boring".

Let's go through it section by section:

ICW:
I don't mean to hate on the ICW. I love that it's there and I've used it a ton. However, it's all low-lying coastal swampland. Dirty water. It's a valuable road to travel upon, not a destination in itself.

The Hudson River:
Some beautiful areas, but mostly boring and dirty water.

Erie Canal:
Very cool for a few days. Really the locks are incredibly well-maintained antiques. But after hanging on to the slimy lines in the locks gets old and you really just want to get it over with.

The Great Lakes:
Arguably the BEST part of the Great Loop. However, most Loopers are fearful of the rough open water which gets progressively worse towards the end of summer. This results in Loops rushing past some of the very best cruising grounds available on the Great Loop.

Chicago to Mobile:
Some highlights for sure, in particular Chicago and Kentucky Lakes. HOWEVER, most of the inland rivers from Chicago to Mobile are industrial waterways. Really not intended for recreational use. There are limited facilities and the scenery is unchanging. Also the water is dirty and not recommended for swimming.

Gulf of Mexico:
Arriving at the Gulf after miles and miles of monotony is magical. Then you get to gear up for the longest stretch of open water on the Loop. This is exciting, especially if you have never spent a night out on the water 100+ miles from shore.

Florida Keys
Once you arrive at the Florida Keys, things are again pretty awesome. It's a good thing too because at this point, you're probably exhausted and beaten down by the relentless traveling schedule. Once you leave the Keys, you are back on the East Coast and again putting along the ICW.


3. It's Dirty / Polutted.
Most of the water on the Great Loop is shallow, muddy, and too polluted to want to go swimming in. For example, you don't really want to swim in: The ICW, Hudson River, Erie Canal, Illinois River, Mississippi, Tom Bigby, Chesapeake, or Delaware bay.

Really just about anywhere on the Great Loop is not great for swimming except for the Great Lakes and in the Florida Keys.


What I Recommend Instead
Choose a cruising ground and take the shortest path to get there. That still might be one or two thousand miles. America's waterways are the PATH. You're bound to travel upon them. But to make the into a destination is a mistake.

The best cruising often involves the LEAST amount of travel. It's counter-intuitive but true.

The North Channel in Canada is great because there are hundreds of places to anchor, cool islands to check out, and nearby towns with grocery stores and water. The same thing can be said about the Bahamas. Once you are in the Abacos you can travel around from anchorage to anchorage and never be more than a day from a great grocery store in Marsh Harbor.

Once you ARRIVE at a cruising ground, the FUN begins. That's when you are back in vacation boating mode. The "getting there" part pretty much sucks, and The Great Loop is forever "getting there" and never arriving.

If you are buying a boat to go cruising:
I recommend buying the boat you want that is as CLOSE to your intended cruising ground as possible. For example, if you want to head to the Bahamas, buy a boat on the southeast coast of the US. If you want to cruise the great lakes and you are going to buy a boat, buy one that is already IN the great lakes.