We left Worton Creek and headed to Chesapeake City on the C&D Canal. The next day we passed through the C&D and made some progress on the Delaware Bay.

It was a cloudy, yucky day, but the wind was great and for the first time it was not coming from the direction we wanted to go!


The Delaware Bay has a strong tide, so it is flushed with clean ocean water ever 12 hours or so. We started to see clear-ish water and white bubbles (instead of the yucky brown bubbles you see on the Chesapeake Bay). Still, nearly every waterway in Delaware, other than the ocean beaches, are unsafe for swimming and fishing. I don't remember the water being so nasty the last time we were in this area.

After two days of great wind on the Delaware Bay, we made it to Cape May. The short ocean hop from the mouth of the Delaware Bay to Cape May inlet was an interesting one. As we entered the ocean we turned north into the strengthening wind and waves. We clocked a fairly steady 25 to 30 knot apparent wind.

The waves quickly grew to 5 to 10 feet. They were nice ocean rollers for the most part, with larger, steeper waves mixed in to make me anxious. We pushed ahead at a slow 3 knots. I didn't want to pound into the waves too hard. We didn't have far to go, and I saw no reason to make the trip any rougher than it needed to be.

At Cape May, the waves were breaking into the inlet. Entering the inlet seemed like a very bad idea. I did not want to experience surfing on a breaking wave through a narrow inlet with a sixteen thousand pound boat.

I've never understood why the inlets on the Eastern Seaboard are so pathetically protected. Inlets on the Great Lakes typically have an outer, and inner set of protective barriers. In bad weather, the outer arms provide a welcome refuge, calming the big waves so you can safely enter the inner channel. That is not how it works on the East Coast. 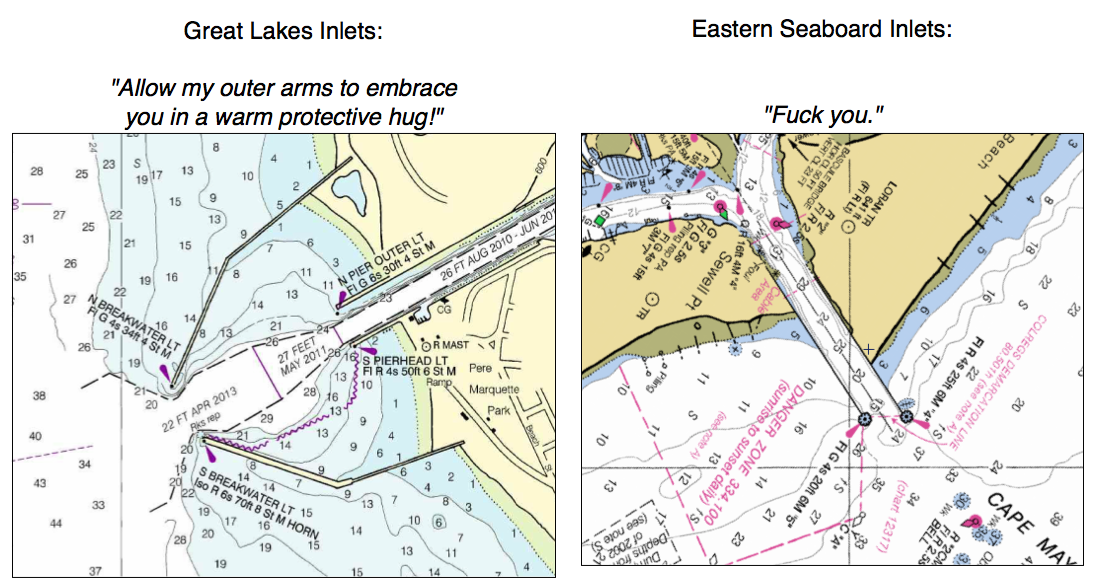 Our choices were to either anchor in the USCG practice firing range behind the inlet, or attempt to pass through it. I saw fishing boats going through, so I thought maybe it wasn't as bad as it looked. I got very close to the inlet several times to scope things out, and on one of my scouting ventures I thought I saw a calm in the waves so I went for it.

The boiling water and crashing waves pushed, pulled, and twisted the boat. I worked to counter act and keep us away from the rocky inlet walls. It didn't feel like we were moving at all. It seemed like we were sitting in one spot with waves crashing everywhere around us. So I was surprised when I looked at the GPS speed and saw we were moving at 6 knots. The tide was pushing us in.

After what seemed like an eternity, we made it to calm water. We motored on to the anchorage. I was excited to be back in this area. The last time we were here was in 2007. At that time the anchorage was crowded and the coast guard was going around telling boats through a loud speaker that they needed to "anchor further back from the channel".

Our 2007 stop at Cape May was just a one night stay. We arrived late and left early. At that time we were on our way south to an unknown destination. We had no idea where our adventure would take us.

This time around, we spent several days in Cape May and got to see a bit of the town. It's actually a pretty nice area. We spent a day doing chores. We motored over to the west end of the harbor to get fuel, water, and pump out at the South Jersey Marina. The manager there was really nice and let us leave the boat on his dock while we went to the grocery store.

Getting to the grocery store involved walking a little more than a mile down a busy but pleasant street lined with cute houses. I carried Hobie on my back and the girls got a lift in the marina courtesy car. I didn't ride with them because we didn't have a car seat for Hobie.

We were surprised to find that the grocery store charged for parking. It made us happy we didn't have a car. The grocery store was small, but it had everything we wanted. We stocked up, then walked back to the marina.

It's always a fun experience to walk down the street carrying groceries. People look at us with expressions on their faces that say “aw.. you’re poor…” Using the baby stroller to carry the groceries really adds a nice touch to the homeless image.

The marina manager had given us 2 free hours on the dock. After that he was charging us for the night. We made it back to the boat just in time, dropped the groceries in the cockpit. LeeAnn collected all the dirty laundry and everyone jumped back off the boat to go to the marina laundromat while I took the boat back out to the anchorage.

I put the groceries away and made myself a sandwich for lunch. While I was eating, an odd looking group of people came floating by in a large dinghy. There were 6 people of various ages. They had a small trolling motor, and several people had small paddles. The tide was carrying them towards the west end of the harbor where I had just come from.

As they floated by, we struck up a conversation. They were a family from new Zealand. They had bought their boat in Florida and were completing the "Great Loop" which meant they were heading in the same direction as us. I asked if they wanted a lift and they replied that they were fine. And they did look very relaxed, floating along with the tide.

Not long after I pulled up anchor and headed back to the marina to pick everyone up.

Here is a video of our passage through the C&D canal, our trip down the Delaware Bay, and little bits from out on the Atlantic heading towards the Cape May Inlet.

Unfortunately, there is no close up video of going through the inlet. We were too busy hanging on with both hands.