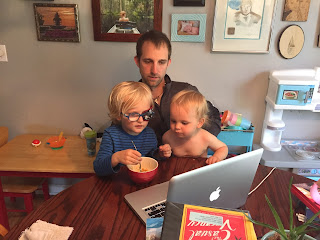 I've been going to work on the boat every day. It's been a little hard being away from LeeAnn and the boys. By the time I get home for dinner I can tell that everyone is a little on edge. Hobie craves attention and life just goes better when there are two parents around to give it to him.

So for two days we tried packing everyone up and heading to the boat together. This was not very productive, but it was a lot of fun! We packed a cooler of food, brought some games and toys for the boys.

Charlie was only 1 last year so he probably didn't remember the boat. He isn't talking much yet, but we could clearly understand him as he walked around saying "like boat, like boat." We walked him around the boat, helping him with the three steps down into the hull where he and Hobie will sleep.

We walked him around the outside of the boat. Despite this tour, he later took a step into the cockpit, expecting it to be a "normal"step distance, and realized mid-fall that it was a much higher step. He landed fairly softly on the giant foam alphabet letters strewn about the cockpit floor and said "Whoa!!" 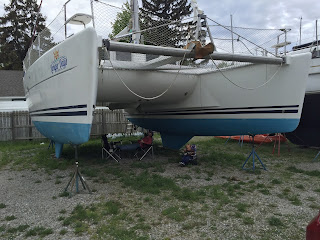 Later, Hobie rushed on deck to climb in through the hatch he opened in high room. As dove for the hatch, he bumped his leg on a low ledge. He was not as lucky as Charlie, hitting the hard corner hard with his shin. He held it crying, and refused to let anyone look. Fortunately it ended up being short-lived pain that didn't stop him from returning to his mission of climbing through his bedroom hatch.

He lowered in his bottom half, and became too scared to let the rest of his body drop. Yelling for help, scared to make the transition from dangling to hanging. We encouraged him to "keep going!" He managed to lower himself another few inches and found that he could stand up. He has grown a lot since last summer. Now when he stands on his bed his head brushes against the cabin top.

When LeeAnn laid down with Charlie for a nap, Hobie and I put the lifelines back up. I take the lifelines apart each winter so they aren't damaged when the boat is shrink wrapped. Hobie helped me put in the fasteners that keep the lifelines in place. I sat watching him, not worrying about a lack of time. 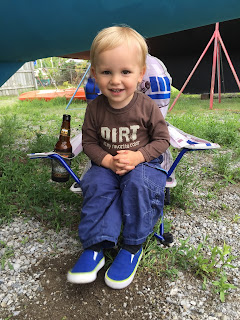 The boat feels much safer with the lifelines back in place. The rules are that kids aren't allowed out of the cockpit without an adult, but kids don't always follow the rules. With the lifelines back in place, I actually let Hobie explore the decks on his own a little bit, and he did very well. Of course, what Hobie does, Charlie does. So I'm not sure how we will work that out.

I can see how much easier it would be to wait to move aboard until the kids were a little older. They would be so much more capable. That being said, the owner of the boat next to us says "go when they are young, my kids aren't interested in sailing anymore."

His dream of cruising with his family was never realized and he encourages us with a hint of sadness in his eyes. Doug (the boat neighbor) is a super nice guy. He lives a few hours away and drive to Muskegon for the boating. He bought me a delicious barbecue sandwich the day I met him and said "you aren't anything without your strength."

Doug owns a monster Irwin 52 Ketch that reminded me of our old Privateer 35. A beautiful boat, but in need of some cosmetic work. The inside was undergoing some saw-zaw level renovations, and I was a little jealous of his ability to just cut into his boat. Doug is super friendly, hospitable, but the handgun sitting casually on a shelf gave the impression of some sharp edges to his personality. 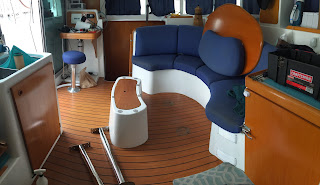 Overall boat progress is going slow but good. Port head plumbing is almost all complete. Just waiting on West Marine to get in more 1.5" hose. Sanded down my sail drive for repaint. The table to bed conversion is currently at a stand still. I need to do a little more research into which table pedestal will be best. Ideally I'd like to find an air assisted pedestal to make raising and lowering the table as easy as possible.

When I removed the plates surrounding the sail drives today, water started pouring out of the screw holes. This is alarming, however I checked with some other Lagoon 380 owners and found it's not completely unheard of. I'm going to look further into it, and most likely fill the screw hole with some 5200 sealant before the boat goes back in the water. 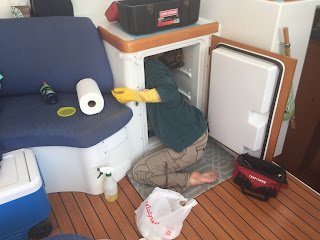