350 Miles from Mobile to Clearwater

After motoring 1,300 miles of rivers and canals we arrived in Mobile, Alabama where we put up our mast. After all that motoring, the LAST thing I wanted to do was motor a few hundred miles more on the Gulf Coast Intercostal Waterway (GICW).

I wanted open water sailing! I wanted to be able to hit the autopilot and walk away from the helm for five minutes without having to worry about running into anything. Most of all, I wanted to make my wife happy by arriving in Clearwater in time for us to make it to Thanksgiving dinner with friends! The only way that was happening was to make a straight shot, 350 miles from Mobile to Clearwater. 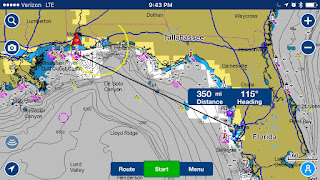 We've done enough "offshore" sailing to know that it goes a lot better when we have an extra person aboard. It leaves one person for the kids, and two people for the boat. Plus the night watches go from 3 hours on 3 hours off, to 3 hours on, 6 hours off. A much easier schedule

We started asking around for crew, which is not easy to find even in a place where we know a lot of people. Sailing depends on the weather, so departure and return dates are a moving target that work schedules don't accommodate.

We asked one of the boatyard guys about potential crew and he gave us the number of some friends of his who had offshore experience. We invited them over for dinner, everything fell into place, and we had one experienced crew member, Devlin, sign on to sail to Clearwater

We prepared for the big trip. I changed the engine oil, oil filters, fuel filters. Made sure my engine belts were tight. After 2 months of flat river water, we had gotten a little lazy and some junk had piled up in the cockpit and on deck. Things needed to be put away, or secured. We filled up our propane tanks, stocked up on provisions. Then... our fridge died!!

Our fridge had developed a refrigerant leak back in Muskegon, so I had bought a new fridge knowing it would eventually die. I spent our last day in Mobile installing the new compressor and evaporator plate. Unfortunately, the new fridge didn't work!!

It first had a resistor problem in the thermostat. Once I got it to turn on, it never got cold. I'm assuming it left the factory without receiving a refrigerant charge, due to the inspection paperwork not being filled out.

Unfortunately, we had a narrow weather window with no time for a repairman to come out. After a night of our fridge at 55 degrees, all the meat was bad. With no car to get to a grocery store, we called Devlin for help. He grabbed a cooler and went to the grocery store before arriving at our boat for departure.

The passage to Clearwater was some of the roughest sailing we have ever done. We were beating into 4-6 foot seas and winds gusting over 20 knots. During our first night out I sat at the helm in the small hours of the morning. In the darkness, the most I could see were the shapes of waves sweeping past me. Spray soaked me and the deck. I wanted to record video, but I felt so horrible I couldn't force myself to go get my camera.

As the wind shifted, we ended up heading nearly due south. With the sunrise, we tacked back to the north to return us to our plotted course. We then turned back Southeast towards Clearwater. We maintained that heading for the rest of the trip.

The wind and waves continued to moderate for the rest of the passage, but it wasn't until the last day that things really calmed down. I have very few pictures of the passage: 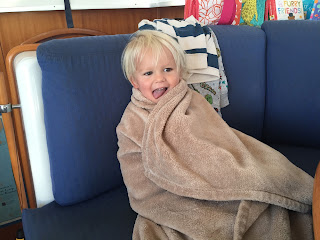 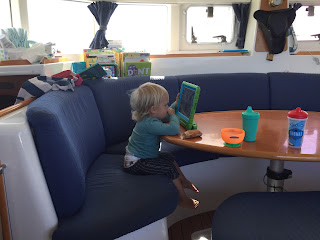 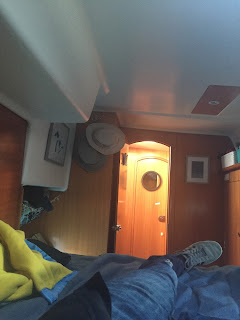 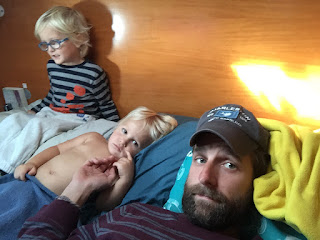 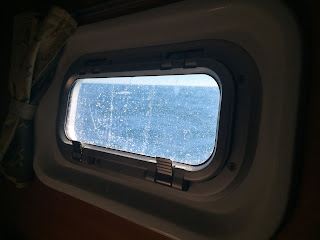