Sorry it's been so long!! We haven't even had cell phone service.

... now I have to try to remember what's happened since we left deltaville, I don't recall where we were last night.
We left Deltaville during a small craft advisory. the winds were not so bad though, 10 to 20, gusting to 25. the waves were around 5 feet. We were running with the wind so it wasn't bad... LeeAnn's aunt and Uncle call it a "Nantucket Sleigh Ride." because you ride down the front of the waves. We left all our friends in deltaville.

We arrived in Norfolk and anchored in a large bay. We anchored in the north side, because the south side was a restricted navy base. Helicopters were taking off and landing constantly. Norfolk is the Largest Naval base in the world... or so the cruising guide says. They build navy ships there, along with ocean freighters. We sailed south past big navy ships, with big guns. Men stood on deck next to the guns staring us down.... I waved, they didn't wave back. Bastards!
We saw three aircraft carriers, a submarine, and a lot of other navy ships I don't know the names of.


You have to look close but you can see a row of helicopters. 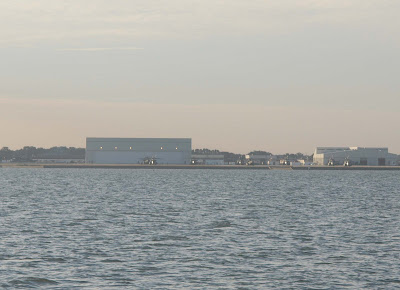 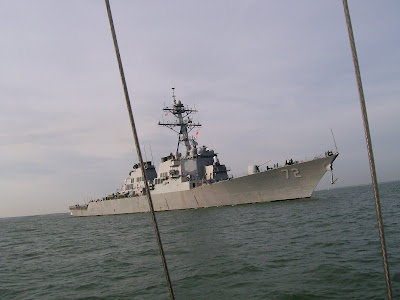 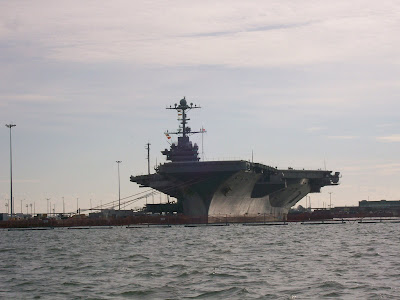 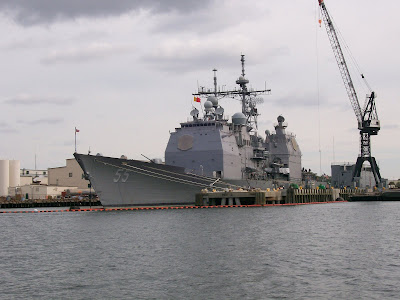 We passed by the Disimal Swamp canal. We wanted to take it but it was closed do to low water. The swamp was dug out by the slaves. The canal was damaged beyond use during the Civil War. After it was rebuilt, Edgar Allen Poe spent a lot of time on it, writing many poems including "the Raven." The canal also inspired the play "showboat."

That night we stopped in Great Bridge. Just 20 miles from where we started. There was a big cruise ship that had run aground on the ICW, and the coast guarde wouldn't let anyone pass south of Great Bridge. We rafted up to a 60 foot schooner and ate snacks with the crew. We stayed in Great Bridge that night and spent too much on groceries. 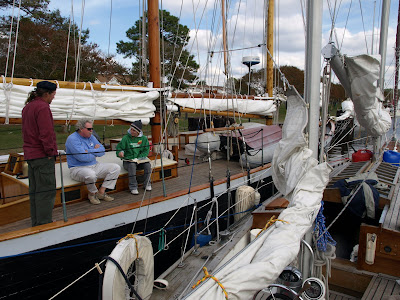 The next day we traveled some distance down the ICW. We anchored right off the side of the canal. I put our crab trap down with some old chicken scraps, in about 5 minutes I pulled up 3 blue crabs. I accidentally dropped one when I was trying to dodge his pinchers. So we ate two. 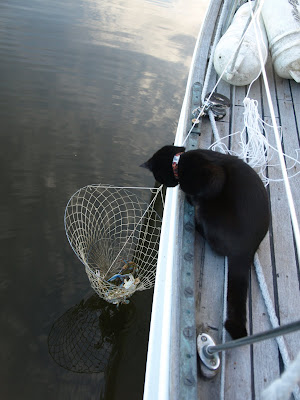 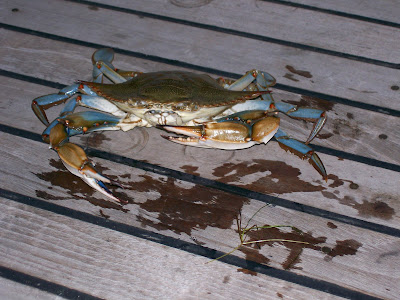 We then sailed across Abemarle Sound. This again was a crazy ride. Strong winds, and big waves. The Sound is really shallow. the waves are steep, and steely grey, it reminded me of being on lake Michigan. We flew across the Sound and made it all the way up the Alligator River. We traveled 50 miles in 7 hours... 50 should take around 9 hours for us. we averaged 7 knots... two whole knots above our average cruising speed. Our friends Roman and Olha caught up with us on the Alligator River. They traveled a whopping 70 miles to meet up with us that night.

We next headed to Pungo River. There we got our first showers since deltaville! It was a slow day... We had to traverse the Alligator Canal.. a long long, perfectly straight canal. The East side of the canal had burnt in a fire... the west side wasn't. it was an interesting contrast. We took a golf cart to the grocery store and spent too much money again... but it all looks so good! This was the first place where I felt like we were really in the "south." The main building at this marina was a big old white place. inside the walls felt like they were radiating heat that they had stored up from the summer. 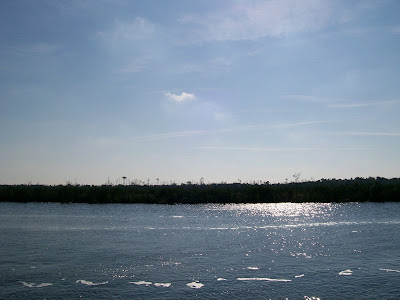 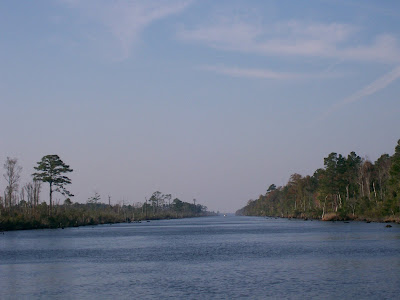 After Pungo we headed to Oriental where we are now! it is a very friendly place, so we decided to stay an extra day. I'm sitting in a coffee shop that seems like it should be on a T.V. show. Every time someone walks in everyone knows the persons name and cracks inside jokes with them. There is a lot of laughing and although everyone is involved in private conversations, there is an overall conversation going on that everyone is involved in.

Our next big stop is Wilmington on the Cape Fear River. We are sad our cruising will be ending for a while... but we are excited to get to our destination and to make some money!

Being passed by a huge boat in Norfolk. 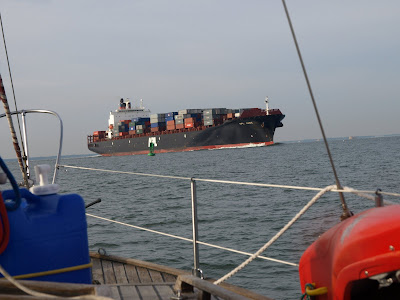 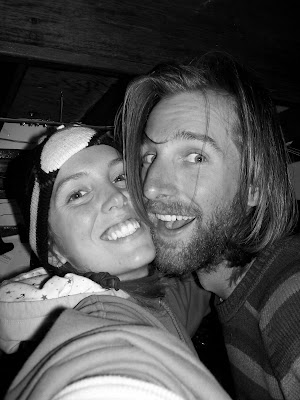 Chatting on the handheld with Navy boats in the back ground. 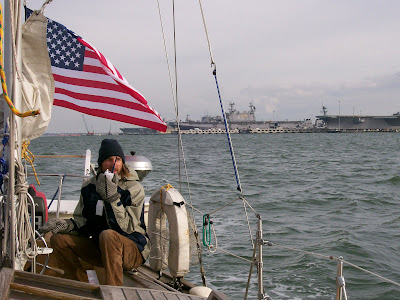 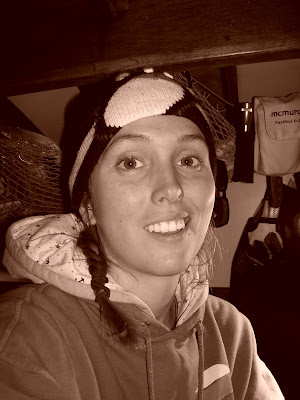 OK. I've spent too much time on the computer. It's LeeAnn's turn! Take care. Thanks f