A daydream and a nightmare at Shroud Cay Harbor

Our first day at Shroud Cay we anchored in the anchorage marked on the chart. The next day we moved around the corner into what's called "Shroud Cay Harbor". It's only large enough for 1 boat. You might call it a lagoon. It was very pretty, and we had our own little private beach: 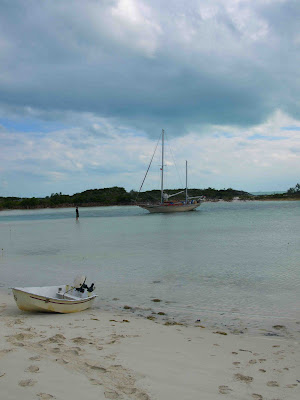 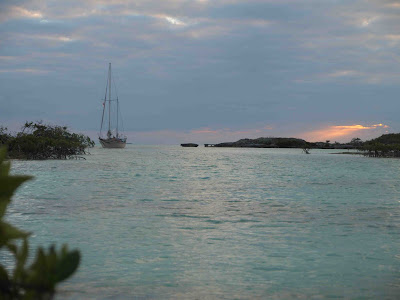 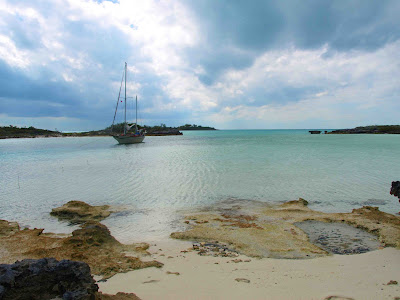 Our own little beach where we hung out for two days: 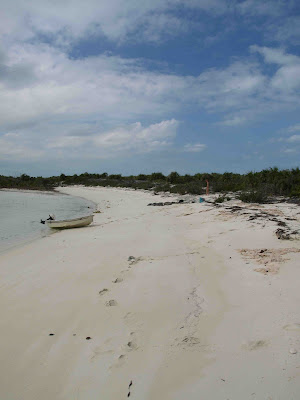 After hanging out on the beach all of the first day, we came back to the boat and had a great dinner, Chicken Alfredo. It was canned chicken and the sauce was made from powered milk, but it was good to me! Then we watched a few episodes of Arrested Development and went to bed.

I fell asleep fast, and slept hard. I was excited to get a good nights rest without the annoying ocean swell rocking the boat. Suddenly I woke to a loud CRASH. A pizza pan with some other dishes on top of it had slid off the top of the toaster oven. I’m so used to things crashing at this point, so I didn’t really think much of it at first, but when I got up to take care of the mess, and noticed the boat had a slight tilt to it. The situation slowly became clear to me. The tide was falling and we were aground.

The optimist that I am, I thought “I’m sure it’s already low tide, this is probably as bad as it will get”.

I scanned the shoreline with our spotlight. I could tell it wasn’t low tide yet because the mangrove roots were still underwater, but I still clung to a hope. The tides vary from day to day. Some times they are really high, and sometimes really low. Maybe we would be lucky and this would be the most the tide would drop.

I checked our chart book, low was at 1:15 AM in Nassau. It was 10:40 PM, and we were 30 miles east of Nassau. I didn’t know if that meant our low tide would be sooner, or later than 1:15. Either way it meant that low tide was at least 2 hours away it, and that things were going to get worse before they got better.

It’s amazing how fast a tide falls. We were already heeled over to 12 degrees. It seemed like only moment later we were at 15. The tide continued to drop and the boat laid further and further on it’s side.

At 2:31 AM and the boat settled in at 28 degrees. Drawers fell open, plates fell on the floor. At first I tried to keep things picked up, moving whatever fell to the low side of the boat. But things kept falling and eventually I just left them on the floor.

It’s very difficult to move around on a messy boat that is heeled over that far. There was no walking. I crawled around like I was playing on a jungle gym. I started to get a headache, probably from the stress of the situation.

It wasn’t really possible to sit, I was always sort of laying down. LeeAnn  wedged herself against the wall and tried to sleep. We tipped to the point that the rail of the boat was just above the water. I hoped that we were at slack tide. There was no way I was going to sleep before the boat started to rise again. The waves lapping against the hull sounded unnervingly like the blub blub blub sound a sinking boat might make.

I thought about the day we had spent living out a scene from a postcard. The day seemed to fantastic, to dreamlike to be real. And in the dark the dream had turned into a nightmare. It all seemed so perfectly opposite. So novel. So unreal. They say reality is stranger than fiction. In some way this felt like life reminding us that there is a natural balance. Two sides to every coin. A low for every high. Or maybe I just need to do a better job when anchoring in such a tight spot.

Finally, the tide started to rise, and once I felt sure the boat was not going to sink, I did my best to fall asleep. The next day, everything seemed like a fairy tale again, and we stayed an extra day/night.