We woke up this morning to find the other boats had all left the anchorage. I was sad we hadn’t already left too. I was anxious to get to Green Turtle Cay. We packed up, and headed out. The wind was out of the west, and later switched to the North West. It pushed us along at 5.5 to 6.5 knots. It was a great sail. We went from Sale Cay to Green Turtle Cay in 11 hours, an average speed of about 5.5 knots.

By the time we got to Green Turtle it was dark. We knew the channel was very narrow, and it was rough conditions. So we decided to anchor outside with the other boats, despite the lack of protection from the waves.

We made popcorn, cuddled up close, and started to watch “Galaxy Quest“, but my patients with the waves was worn out before Tim Allen realizes he is on an alien spaceship.

We were rocking like crazy. Water was even splashing up unto the foredeck. I didn’t have to say anything to LeeAnn, we made eye contact, then started making preparations for what we knew was going to suck: pulling up anchor in large waves, then navigating an unlite, unfamiliar channel in the dark.

After we had secured everything on deck and locked the cat in the bathroom, I walked to the bow of the boat to pull up the anchor. It was pitch black. I couldn’t even see the anchor line with out shining a light on it. The waves were hitting us hard, I didn’t have a chance of pulling up the anchor by hand.

LeeAnn sat down at the helm and put the engine in gear. The boat veered off far to the right, tugging at the anchor and pointing us in the direction of the other anchored boats. I called to her “steer us to the left!”

The next thing I knew we were pointing far to the left, tugging at the anchor. I called again, “back to the right!” and as we came close to pointing towards the anchor I called “straighten her out!”

After that we quickly got into a groove. I would call back slight course corrections and we stayed on track well enough that I simply had to pull the line on deck and wrap it up.

After we got the anchor secured we turned our attention to the more daunting task of safely navigating the channel. LeeAnn kept a look out for boats and watched the depth sounder while I stayed bent over the chart. I navigated on the fly, quickly taking our latitude and longitude from the GPS and plotting it on the paper chart.

Sometimes we wouldn’t be able to find the next set right away and LeeAnn would have to shine back on markers we had passed to be sure we were still in what we hoped was the middle of the channel. When she aimed the flashlight behind us, I was flying blind.

Eventually we would pick up another red, or green, I would head for it, and the process would start all over again.

We crept on. Suddenly we caught a break. A ferry boat was coming up behind us fast, shining his spotlight. Kindly, he started shining the channel markers for us, guiding us in. By the time he passed us we were close enough to the inner harbor to make it the rest of the way with out any trouble.

We dropped the anchor right behind some French sailors. We were technically still in the channel, but the wind was high, and it was very crowded. I didn’t want to go any further forward until we had daylight.

We were very near the shore, with barely enough water to float, but we made it! Exhilarated, and with adrenaline pumping, I rushed back to the cockpit where LeeAnn was standing and gave her a big hug, “We did it!” I exclaimed with a big smile on my face.

She didn’t share my excitement. I didn’t understand her attitude. We had been presented with a challenge, we worked as a team, and overcame it. The anchor was down and our success was certain, what was there to be upset about?

I took in our surroundings. There were lights in the distance, and music from several parties drifted to our ears. Music that varied from local island music, to Cher. Everyone was celebrating New Years Eve.

LeeAnn was homesick, and upset that we weren’t in a better place to celebrate New Years Eve. I found myself mystified by our differences. Sure I missed my friends and family, and I would have liked to be at one of the parties on the island, but I was just as happy to be on my boat with her. Reveling in our moment of success.

For me, the challenge we had just over come was far more satisfying than spending the night partying somewhere. Parties are a dime a dozen. I’ve been to so many stereotypical New Years Eve parties. You get drunk, count down to mid-night, kiss, and through the years it blurs into one great big indistinguishable cliche party.

The experience we had just had entering the harbor would be burnt into our memories. Of all the New Years I’ve experienced, and I’m sure for many to come, this is one I will distinctly remember.

Yes we are alone, far from home, and have no one to celebrate with on New Years Eve. But we are on an adventure, writing the story of our lives. There is romance, and charm in the night we spent New Years Eve on the deck of our boat, listening to the party echo out over the water. Strangers in a strange land. And when we count down to midnight, we’re alone, but we have each other. For me, that is the perfect way to spend New Years Eve.

We went to sleep. Angry at one another for not understand each others feelings. When we woke up, each of us felt better. We went ashore for the junkanoo parade. By the time we got back to the boat, we had completely forgotten about being angry at each other the night before. 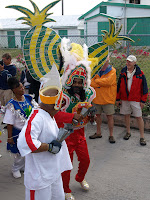 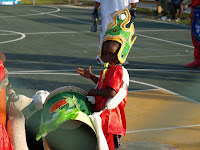