Our First Day In The Bahamas

We slept hard, and when we woke up it was raining. What a bummer! Our first day to get to play in the Bahamas and it was raining! We cheered up by making chocolate chip waffles. Soon the rain stopped, and my thoughts drifted towards something I’d been looking forward to doing for months: swimming. 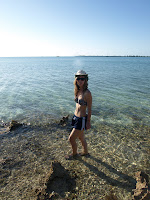 The deck of the boat was still wet from rain, and it was cold out, barely 70 degrees. Determined, I started preparing for a swim. I dug out the snorkeling gear that LeeAnn and I had bought using a Christmas gift card, thanks Derrick! This day had been a long time coming. 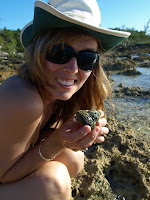 LeeAnn joined me. We slowly pulled on our bathing suits and went outside. The deck had dried and it was a little warmer, but the wind was blowing harder. We looked into the water. It was alien. Who knows what was swimming around in there? Sharks, Barracuda, mutant killer shrimp?

I put on my goggles and prepared to jump in. It took me a few minutes to gather the courage, then I jumped. I stayed under and frantically looked around. I couldn’t see as far as I thought I would be able to. It was a little hazy. I kept spinning in circles, looking over my shoulder. I was scared that a shark was going to dart out of the haze at any moment and take a bite out of me.

“Okay” I thought “I’ve done it. I‘m swimming. Now I’m going to get out of here!” I was in such a rush to get out of the water, fearful of what might be nipping at my heals, that I ended up losing my grip on the ladder and falling back in.

LeeAnn decided that she wanted to slowly step down the ladder instead of jumping in. She got about half way down before she lost her balance and fell in, nearly pulling the ladder in with her. She rushed to get out. That was it for LeeAnn as well.

We moved onto cleaning ourselves. It was pretty cold, but it had been a while since we had a chance to wash up so we kept at it. It felt great to be clean. Then LeeAnn cut my hair so I didn’t look like such a bum. By the time she was done the sun was high in the sky and felt warm on my skin.

We laid naked in the cockpit. Warm in the sun, and happy. Eating grapes listening to music. We lost track of time.

When our ambition returned, LeeAnn cleaned the inside of the boat, and I cleaned the outside. We decided to go for a dinghy ride to shore. We explored the shoreline that we assumed was a small coral reef for the rest of the day.