Crossing from Florida to the Bahamas

We left West Palm Beach, Florida around 1:00 AM on December 29th 2008. I tried to get some sleep before we left, but I was wide awake. I felt like a kid giddy with anticipation on Christmas Eve. 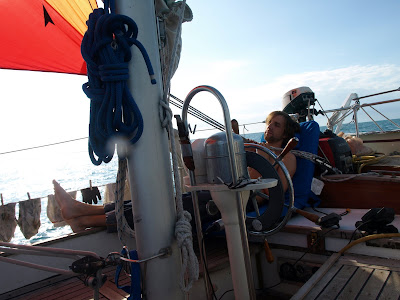 Crossing the gulf stream started out a lot rougher than I hoped. We were making really slow progress heading into the wind and waves. It was pitch black out. A sharp contrast to the bright laptop screen I kept looking at to make sure we were on track.

The screen was ruining my night vision, and I started feeling seasick. I was ready to turn us around, but LeeAnn talked me out of it.
She wanted to soldier on. She said we should give it a little longer to see if conditions improveed. She seriously amazes me. LeeAnn took over the boat. I laid down in the cockpit looking up at the stars, and after a while I started to feel better. I’m glad LeeAnn kept us going. It was a bit rough for a while, but it progressively calmed down.

This morning the sun rose, and we found ourselves passing between two squalls. Nothing was moving fast, and I sat there wondering which one of the little beasts was going to hit us. The one on our right looked a lot more friendly. Then I noticed a little cone coming down from the storm on the left. I thought “man, that’s weird”.

The storm didn’t look docile in any way, but it also didn’t look like the type of storm that was capable of producing a tornado. As I was thinking this, the cone grew longer, stretching out towards the water. Then I noticed water being thrown into the air, spraying about in a circle. “oh fuck” was all I thought. This thing was coming down really close to us.

LeeAnn was asleep and I wasn’t sure if I should wake her. I jumped up and dropped the main. I wrapped it up tight with bungy cords. Then I got the jib wrapped up. I looked back at the storm and saw the water spout had dissolved. Whew!  But the storms were still approaching and I didn’t want to have our sails up when either one of them hit us. We motored on. Slow, and uncomfortable, pounding into the waves.

After a few hours black storm cells were still circling about, but I felt that if a storm was going to hit us we could get the sails down fast enough, so we put the main back up. The boat settled into a more comfortable motion. LeeAnn came out for her watch. I told her to keep an eye out for squalls and described the water spout I’d seen. I told that if one approached we had to get the sails down fast. Then I went to bed.

When I woke up we were getting close to the Banks of the Bahamas. We were in water over 1,000 feet deep, and in less than half a mile (about 10 minutes) the water was going to shallow up to around 25 feet. It was going to be cool.

The water slowly started to turn to a lighter and lighter shade of blue. When we looked ahead we could see a distinct line of pretty blue water that we assumed was the bank. Suddenly the depth sounder (which only works down to 250 feet) came beeping back to life. We quickly hit 80 feet, shallowing up fast to 70, 60, then 50. Around 30 feet we started being able to make out shapes on the bottom.

I looked ahead and saw huge black shapes all around in the water. I suddenly started to get nervous. We had never seen water like this before. What if the black masses were uncharted coral heads? Was I sure that we were coming onto the bank in the right spot? I started nervously double checking our position and my plotted course. Everything looked in order.

I slowed us down anyway, and kept a close eye on the depth sounder. We hovered around 25 - 30 feet. The water was beautiful and amazingly clear. I felt like we were sailing on liquid glass. We stared. And stared. Then we stared some more. We made it. We’re in the Bahamas!