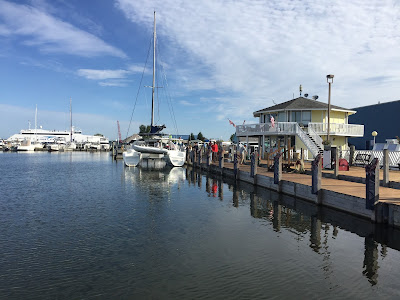 We headed for the fuel dock right after waking up. We needed to top off our fuel, and pump out. I had filled our water tanks the night before. 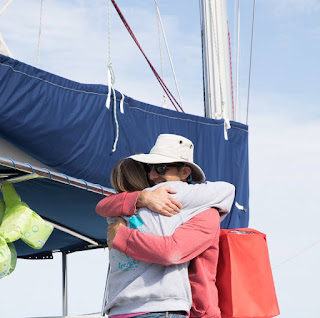 More people came down to the dock to see us off than I expected. It was a little hectic working with the dock hands to get the boat taken care of while also talking with guests and keeping the kids under control.


The toughest person to say goodbye to was my Mom. When we were ready to go, people slowly made their way off the boat, but my mom lingered. I could tell she didn't want to get off the boat.

I finally walked her to the side. We had to go. She turned to get one last look at the boys, then gave me a long, tight hug. I was glad to be wearing sun glasses.

Several people lined up to push the boat off the dock. At least 50% of them were dock hands, and I wish I would have had the sense to instruct the guests to help push us off. Especially my Dad.

I was 20 when LeeAnn and I left on our first sailing trip to Canada. My dad helped push the boat out of the slip, and when he reached the end of the dock, he shook my hand and said: "have a great summer." I felt so proud in that moment. 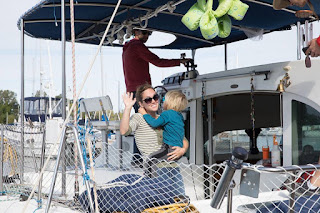 This time, he stayed back. Perhaps satisfied to watch from a distance, or perhaps snapping photos. I told my Uncle Troy to give the bow a good push, then for a moment, I panicked.

I'm very comfortable maneuvering the boat, but in front of friends and family there to see us off, in front of the marina staff, as we departed on a cross country boat trip, I worried that I would crash. We'd ram the dock in front of us with our bow or hit the gas dock with the stern and everyone would question my ability to take the trip.


Fortunately, it didn't happen. We had a smooth departure out of the marina. Then my dad sent me a text that they were heading to the end of the pier to take pictures and wave goodbye. So... even though there was no wind, I felt like I had to raise all the sails. 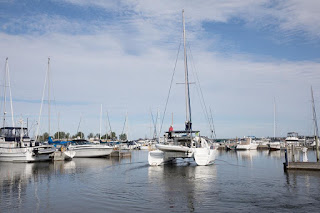 As we approached the channel, I remembered something very important I forgot to do. I had a small bag of pot on board that I meant to throw away before leaving the dock. I didn't want to risk going past the Coast Guard station with it, so perhaps more suspiciously, I went to the back of the boat and emptied the bag overboard.

A sad waste, but the coast guard is federal, and being a branch of the military, they need no "probable cause" to search your boat. It's not worth the risk. I also tossed my pipe in the water and sadly watched it sink.


I wondered how long it would be before I smoked again. I thought about the time a group of us bought weed in the Bahamas. The purchase was shady, and I worried the guy we bought it from was going to turn us in to the police for some kind of reward. I suggested we go back to the Norwegian couple's boat to smoke.

It was during a cold front with 20-knot winds uncomfortably rocking the anchorage. The weed hit me hard. So hard that I couldn't understand anything the Norwegians were saying.  For all I knew they were so high they stopped speaking English. I went outside to lay down in the cockpit. The Norwegian girl followed me.

I kept saying "I just need to lay down."

No seriously lady, I don't have a clue what you are saying. I just need to lay down.

After a while, LeeAnn and I stumbled into our friend's tiny inflatable dinghy for the ride back to our boat. We got lost in a universe of anchor lights, high winds, and waves splashing into the boat. We turned around several times, zig zagging through the marina laughing and probably making more of a scene than we realized.

LeeAnn said: "I see my parents!" and I snapped back from my daydream.

They were the first of a few people in the channel to see us off. A short distance later we saw Ken, who has become a good friend. And at the very end, my dad, Aunt Joni, and Uncle Troy.

Without thinking, I turned south, following the shoreline, but our deck hand, Mike, questioned what heading we should be on for Chicago. I checked my route and turned to the Southwest. A course that would steadily leave the coast a Michigan behind us.

LeeAnn and I watched our home port shrink into the distance. We wondered whether our boat would ever come back to Muskegon, and if it did, how many years it would be. 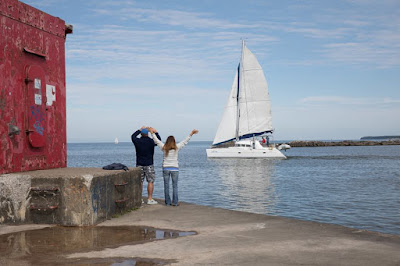 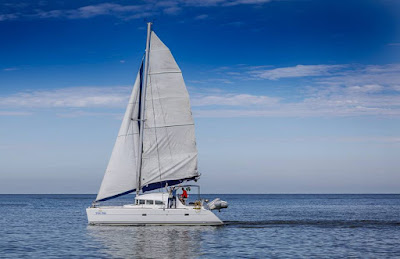 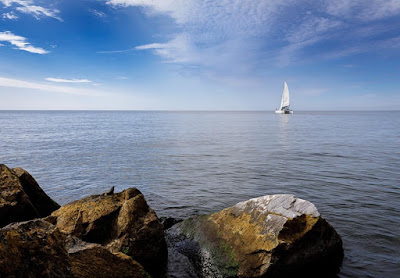 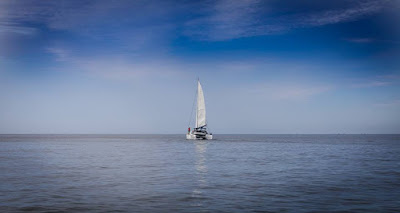 Creating content takes time. Time is money. If you enjoy this AD FREE blog, please support it! Become a Patron!