Sailing to Chicago from Muskegon

Passage sounds so dramatic. Like something that should be done on the ocean. But in my book, anything that requires traveling at night is a passage. It means traveling far enough that the weather could change and you will be stuck out in it.  LeeAnn and I also refer to passages as going "offshore" or "making a jump" due to the distance covered.

We take passages pretty seriously. It's not a boat ride, or what most sailors would refer to as a "day sail." We conserve energy (you never know when you're going to need it), nights on passage can be very long, and lacking in sleep. We don't drink. We don't let the kids use the rope swings or do anything that would increase the risk of them getting injured. They are already oblivious to danger, and when you are on a passage just getting to shore can take hours, not to mention getting from a marina to an emergency room. The worst case scenario is a helicopter ride from the coast guard. Something I hope to never experience.

All that being said, I think I've taken passages a little too seriously over the last few years. Granted, LeeAnn and I have had enough terrifying experiences to keep us from ever wanting to leave solid ground again. We have reason to be cautious. But I used to revel in the thrill of taking a boat to sea. I'd pretend I was in a movie, playing the part of a brave adventurer. After seven years of being submissive to customers and employees at work, this adventurous version of myself is what I want to rediscover.

This was the mindset I had as we began our 100-mile passage from Muskegon to Chicago. It would take us 14-20 hours depending on the weather. It was the most ambitious passage we've made in years. Although we've sailed over 1,000 miles on oceans, bays and the Great Lakes since 2014, all of it has been following the coast. This trip to Chicago was still "coastal." At most, we would be 35 miles from shore, but that's far enough to lose sight of land and be 7 hours from help. The route would take us diagonally through the bottom half of Lake Michigan. The widest part.

We were clear of Muskegon's breakwater by 11am. We watched the horizon slowly break apart behind us. It appeared to melt into the water. The boys had fun pretending to not be able to see land. Soon there came a time when they didn't need to pretend.


By 6pm we were dead center in the middle of Lake with fairly calm winds. The lake was incredibly smooth, which was nice, but it also meant that the motor was on the entire time. Considering we would be dropping the mast in Chicago and motoring all the way to the gulf, I hoped we could sail to Chicago. For a while, we picked up some good wind out of the west and started making about 7knts. It looked like we would arrive in Chicago around 1am. Then the wind died and our speed dropped back to 5 knots.

Our forecast for the night changed to winds out of the Southwest, 10-15 knots. right on our nose. It's pretty incredible. We had a prediction for winds out of the North. How can the weatherman be so completely wrong?

Being in the middle of the lake, it was kinda too late to turn back. At least there were no thunderstorms in the forecast.

The boys were a little cranky most of the day. Charlie kept saying "go back, go back" which was pretty heartbreaking.

We grilled steak and some brats for dinner. Then since we were motoring and had plenty of hot water, LeeAnn and I both took showers. I love taking a hot shower while on a passage. It feels mysteriously good.

Then we figured out a watch schedule for the night. With the Southwest winds slowing our progress, I figured we would be on the water most of the night. Mike would take the first watch, then LeeAnn, and finally I would come up to bring us into Chicago.

Around 7pm Mike spotted something ahead. We thought it was a ship on the horizon, dead ahead. It was far off so I didn’t worry about it at the time. After a little while, it hadn't moved, so I got out the binoculars. At first, I thought it was big racing sailboat with a spinnaker up. Then I noticed the two spears on top, and realized it was the Sears Tower! We were all very excited and surprised to be able to see it so far away.

By midnight we were 16nm Northeast of Chicago. The winds had clocked around to the Southwest at about 10 knots. Adding our 5 knots of headway made it feel like a stiff 15-knot breeze.

Small choppy waves built up. LeeAnn saw fireworks and a few passing ships on her watch.

I was eager for our cell service to pick back up. I wanted to let my mom know we were okay. She was worried about us taking a b-line across the widest part of Lake Michigan in the middle of the night.

By 1am the moon was breaking through a patchwork of clouds. The skyline of Chicago brightly lite our way. The wind full in my face. Not warm, but not cold. The waves were building at about the same rate that we were approaching Chicago, so the weather felt balanced. Looking to pass the time quickly on my watch, I started watching episodes of "Silicon Valley". I set a timer to 10 minutes, and each time it went off I went outside to scan the horizon for freighters.

The approach to Chicago at night was a lot easier than I expected. There weren't any navigation lights for a channel. This reduced confusion, but it was a little unnerving. I was really bummed when I couldn't find my spotlight. When coming into an unfamiliar marina a night, it's extremely handy to have a powerful spotlight. Fortunately, the moon and the city provided plenty of light to see by.

We found a vacant end dock, tied up, and went to bed! 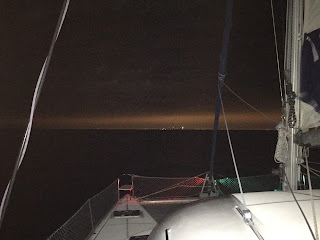