Are we living aboard yet? 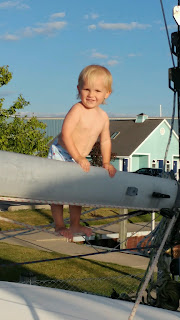 LeeAnn left for Europe last week Friday, and the boys and I moved onto the boat. So I guess we are officially living aboard, but it doesn't really feel like it.

The house still has a ton of 'stuff' in it. We've been storing, selling, and giving things away for months now. I feel like we should have reached the bottom by now, but we're still digging! It never really felt like we had all that much stuff. But when you start to go through it all... it adds up.

Then there are things like... cooking spices. I can't bring them all. Half drunk bottles of alcohol. Should I dump them or throw a party?

At what point do I take our shoes off the shoe shelf and sell the shelf? When do I take the magnets off the fridge?

I guess the answer is 'now', but it's hard because mentally I think I'm still living in the house. Even though the beds are gone.The kitchen table is gone. The decorations are gone from the walls. It's still my house, and in my head, I still live there.

I've found the best approach to getting things done is to pick a room and clear it out. Within that room, it's helped to take everything off shelves, out of the drawers, out of the closet. Once things are spread out across the floor, no longer in their "place" it's easier to say "ok, now where does this go?"

I've spent so much time dreaming about sailing away, of leaving my house. I never appreciated it much. Now I look at it differently. I'll miss wrestling with my kids on the living room floor. Watching as they launch from the couch and knowing that if they fell, the worst they would get is a hard landing on a carpeted floor.

It's not all bad though. I love the minimalism of living on the boat. it doesn't feel very minimalist with "stuff" pouring out of lockers. but it's the most important stuff. The kid's favorite toys, their favorite books. Many I forgot we even had. Where has "if you give a mouse a cookie" been hiding all this time? We have all our favorite clothes. Our favorite cooking utensils. You get the idea.

Tomorrow is my third day working on the house. I have the major tasks to accomplish:

Things have been going well at the house, but I hope I can make a bigger dent tomorrow. I still have a lot of work to do on the boat, and a lot of work to get my new company off the ground!