A few "Before and Afters" 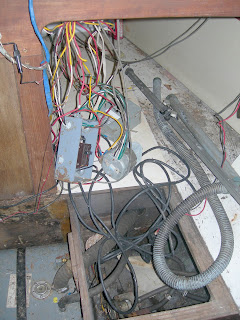 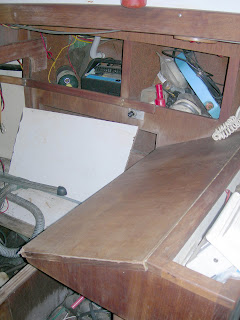 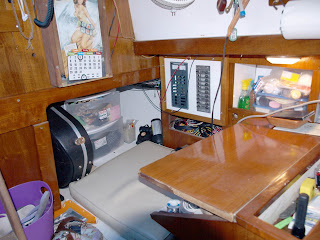 When I first got on the boat there was a rats nest of stray, old, cracked, wires. The boat is about 50% wood, so I thought it would be best to just replace it all. Marine wire is usually really expensive, but thanks to the internet and ebay, I got away with spending less than $100 on new wire. The AC distribution panels were normal household hardware. So I replaced that with a new Blue Sea systems panel.

The bathroom was just plain no fun. It smelt bad. The floor was completely rotted. It all had to be pulled out, but the wood was so rotted that it pulled apart like a tender roast beef. Getting the head off was gross. It was full of mildew. The hoses were old and sticky. Aren't you jealous!?!
After I got the head ripped apart I had to rebuild it. I plan to install a shower, so the floor had to be watertight. Custom shower basins aren't cheap, so I made my own from fiberglass. Also not fun, again with the sticky and smelly. Fiberglass is usually expensive, but again thanks to the internet I found a place where I could get fiberglass mat for a $1 a square foot. Dirt cheap!
I've never washed my hands in a sailboat head. The floor was not level, and I couldn't stand up straight. It is a million times easier to just get out of the bathroom and wash my hands in the normal sink. So to give us more space I pulled out the sink and counter in the bathroom.

Bookshelves. You can never have enough. These were fun to do. I used white panel board, cost $10 a sheet. Dirt cheap. 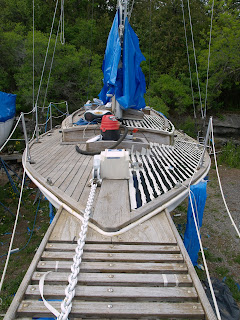 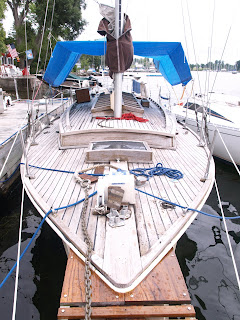 Caulking the deck. Boy was that fun. The stuff is like tar. I had to pull out old caulk, sand down the sides of the joints to fresh wood, tape off the wood, squeeze some caulk into the joint, and then force it down into the joint with a puddy knife. After waiting about a day I would peel the tape off the wood leaving behind a nice sharp caulk line. A tube of caulk doesn't go far, and at 10 dollars a tube I ended up spending around $500 making deck caulk the most expensive project of the summer.

Then at the bottom of the picture is the bow sprit. The wood of the bow sprit was bolted on with rounded, flat head screw driver bolts. The ends of the bolts had been cut off, leaving them jagged. A lot of the nuts ended up getting stuck on those jagged ends. The screw driver head of the bolts stripped pretty easily. So I ended up having to dremel off about 20 bolts. I replaced all the bolts with Hex head stainless steel bolts. I ordered them the proper length so I didn't have to cut the ends off. The bolts cost around a dollar a piece at Jamestown Distributors.
I also varnished the bow sprit. 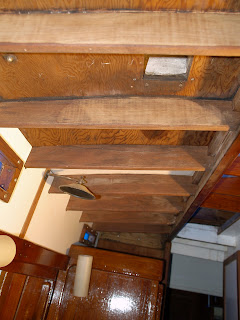 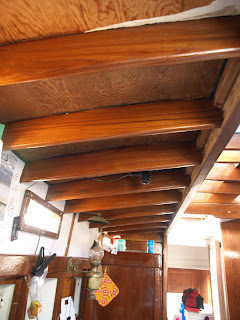 I was really excited to get these beams varnished. It was crappy work sanding them down. I got all full of dust, and all the corners had to be sanded by hand which took a few hours... The end result is nice though. 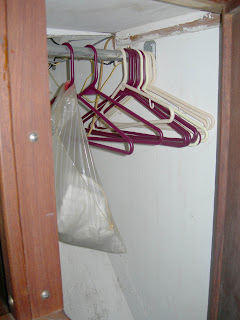 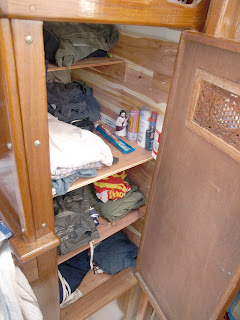 My closet. I figured we could fit a lot more clothing on shelves than on hangers. So I used some cedar to line the closet and build shelves. It took me about 2 days. This was very satisfying work. The only bummer was that I ended up being allergic to the cedar saw dust.