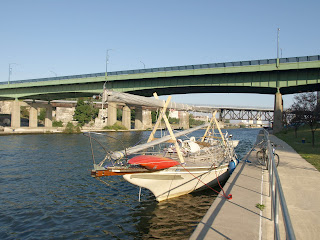 We are currently on the Oswego River, which is apart of the New York State Canal System, in a little town called Phoenix. It is a really nice town. we are staying at a great free (free is good!) dock that has power, and water.

The locks have been interesting. It is a little intimidating to pull these big metal coffins... I mean boxes... then two giant doors close in behind us slamming shut with a loud "BOOM!!" that echos off the walls.

At the front of the lock water forces it's way through seams in the doors that are holding back millions of gallons of water which towers 20 feet above us. We grab the smelly green ropes that hang down the side of the lock and hold on. The lock master opens 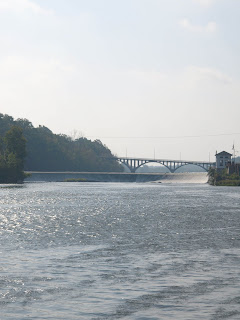 chambers in the bottom of the lock and water starts to boil up like a witches cauldron pushing and pulling the boat.

When we get to the top, the front doors open, and we motor away. There are 7 locks on the Oswego river numbered 1- 8 (there is no lock 4) all of them around 10 to 20 foot lifts. This year the locks are free (free is good!)

The Oswego river is beautiful, it is fun to have a boat on a river. We are like Huck Fin and Jim floating down the Mississippi... except we are going upstream, and LeeAnn isn't a 40 year old black man. I think everyone would agree that I should be Huck. 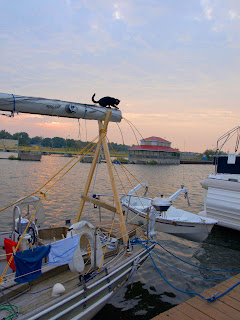 We had some engine trouble. we kept losing oil pressure, and at one point we opened the engine hatch to find a quart of oil on the engine floor. We made it to Phoenix by going slow. We found a mechanic who told us to take it easy on the engine, but that we will be able to make it to North Carolina before we have to pull the engine to have new bearings installed. Yikes! He said the main problem was that I put too much oil in the engine. 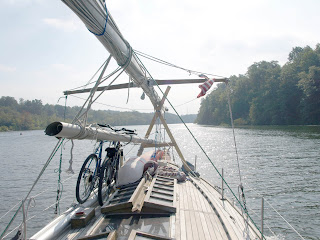